I took this opportunity to visit the city of Gyumri, aka Leninakan, where I lived with a wonderful host family for a month in 2007.  Historical records indicate that settlements began in Gyumri as far back as the 5th Century BC.  The road to Gyumri certainly felt like a path from centuries long past.  Ice patches covered at least half the road as drivers reached their destinations holding their breath.  At least I was.  Is it really 2012?  I was astounded by the beautiful, marble-covered terminal newly built at Zvartnots Airport, estimated project cost at $100 million.  With that kind of financial capacity, I couldn’t help but ask, What is more important?  A modern airport terminal, or safe roads in the winter?  I’ll let you answer that one.

Thankfully we made it safely to my host family’s apartment after a treacherous drive.  The Muguerditchians were incredible hosts to me in 2007, truly taking me in as one of their own, and when I called a few weeks ago to let them know I was coming to Armenia, the mother, a great musician with the acclaimed Kohar Symphony, recalled memories and asked questions as if we had just seen each other yesterday.

Here I am with my host sister, host mom, and host grandmother.  Amazingly kind and hard working people. 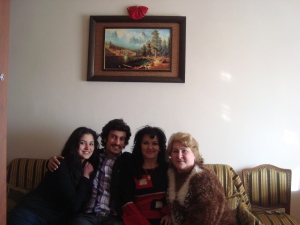 Here I am with Sophia, my host sister, now 15, who has one poster hanging on her wall…Justin Bieber (of course)…and a lot of great energy and enthusiasm to live and learn.  Esteve’s in there too!  She’s very excited to be taking English classes at school and expand her internet savvy-ness.

And here’s a shot of my set list for the show tomorrow night!  (Actually, it’s the day after, but I’m trying to keep it chronological and all as I am about to board a plane in Moscow).

Error: Twitter did not respond. Please wait a few minutes and refresh this page.